After seeing that heart beat for the first time I felt on cloud nine for around 6 hours and then the panic set in again, panic that the heart had stopped beating and that I had no way of knowing. I only had four days to wait until the 7 week ultrasound at epu but it seemed so far away and the hours of each day dragged so badly.

I was now in unknown territory because I had never got this far before, everything that I was feeling I had no idea if it was normal or if it was an impending miscarriage. I had a stitch like feeling in my left side that was causing me worry, I googled for hours every little thing to try and reassure myself but no matter what I did I still worried.

Some mornings I woke up with a feeling of dread that the baby had definitely died now and that my hormones were dropping, my mind and my heart were working against other because I think I knew in my heart baby was ok but my head wouldn’t let me believe it.

The fear built up inside of me before the 7 week scan, I’m never normally frightened of anything but I was terrified about this. Even my husband could tell because I could tell I was making him panic more, because I was always accurate and knew when a miscarriage was starting i think he probably thought I was right when I was saying it’s over now.

We went into the scan with an nhs consultant and and I just stared at the screen and spotted that tiny heart beating away within seconds, I said that’s the heart the baby’s alive isn’t it and the doctor said wow you have beat me to it I was still looking. The baby had doubled in size in 4 days and now was a bigger blob, she pointed out the head and bottom but to be honest to me it just looked like a penis on a screen!

I had 7 more days to drive myself crazy and I guess I drove him crazy too because I was and probably still am an unstable hormonal nightmare!

Week 8 was the day we travelled down to London together to see the consultant, to discuss the pregnancy, for a scan and my second intralipid infusion of the pregnancy. Sat on the train all the way down I couldn’t get the words “sorry there’s no longer a heart beat” out of my head because I just felt like that was going to be my fate at some point.

We entered the consultants room and he stood up shook our hands and was his usual jolly self. He sat down and asked when my last period was for dating the pregnancy, I said I never had a period as I had a miscarriage and then have conceived before a period.

Well that was it, we were in his bad books, he dropped his pen on the table, looked up and said, well how is that possible I would have told you to wait 8 weeks for the hydroxy to be in your system so how is this even possible. I felt like I was back at school and said well we had sex that’s how it happened (didn’t tell him about the extra 4 times as I thought that might be too far).He really was not impressed, I told him I had called the clinic the next day and had been instructed to start the steroids and I also had been for intralipids too.

He told us that the hydroxy will not be doing anything right now and that we had taken a risk, he then shrugged and said well let’s take a look. I laid on the bed and when he walked in the room he said well good luck. Once again I focussed on the screen ready to spot the heart beat and I think I held my breath until I saw it.

He didn’t really speak to us during the scan it was a very short affair and he was just in a bit of a grump with us. Regardless of that though this was further then I had ever got so something was obviously working and he couldn’t deny that. I then sat and had my infusion for 2 hours, strangely I have found them getting more painful and uncomfortable each time that I have it done. I just sit and say to myself that it doesn’t matter I’ll do anything to keep my baby alive.

On the journey home the hubby was really quiet and I asked him what was wrong, he said that the doctor had seemed so concerned that I was pregnant that he couldn’t stop worrying that it’s going to go wrong and that it won’t be ok. I however felt positive and I’ve now made it two weeks past the point that is normally the end, even if it didn’t work out, I now know that I can carry a baby with a beating heart and if anything that gives me hope that we will have our baby one day.

Week 9 scan was right at the end of the week so we had ten days to wait for this one. I just could not believe how much had changed and this time there really was a tiny little person with noticeable features. If I could buy one of those machines and just stare at my baby all day long I definitely would, it’s just completely amazing.

Reaching week 9 was a huge milestone for us as our consultant says that there’s less than 4% chance of miscarriage at this point.

The nausea had really started to kick in at this point but one thing that I can be thankful to the devil steroids for, is that they do suppress the actual vomiting so I feel like I have gotten off quite lightly, so far!

Week 10 and I had to travel to London again for a scan with the consultant, this is the part of this private treatment that infuriates me. Having to travel a 9 hour round trip and pay £275 for a scan that I didn’t feel was necessary but you have no choice when being treated by a clinic like this. If you miss an appointment out then they won’t medicate you. What woman in their right mind is going to risk not having the medication that is keeping their baby alive, so they have you hook, line and sinker really.

I suggested not going to the ten week appointment and to just go at 12 when I would have a nuchal scan with a professor and an intralipid infusion, I was told the treatment is not pick and mix. So I swallowed that and off I was on my 7th trip to London.

However one good thing that came out of my lengthy journey was I got to see my baby again and I got my favourite photo so far. 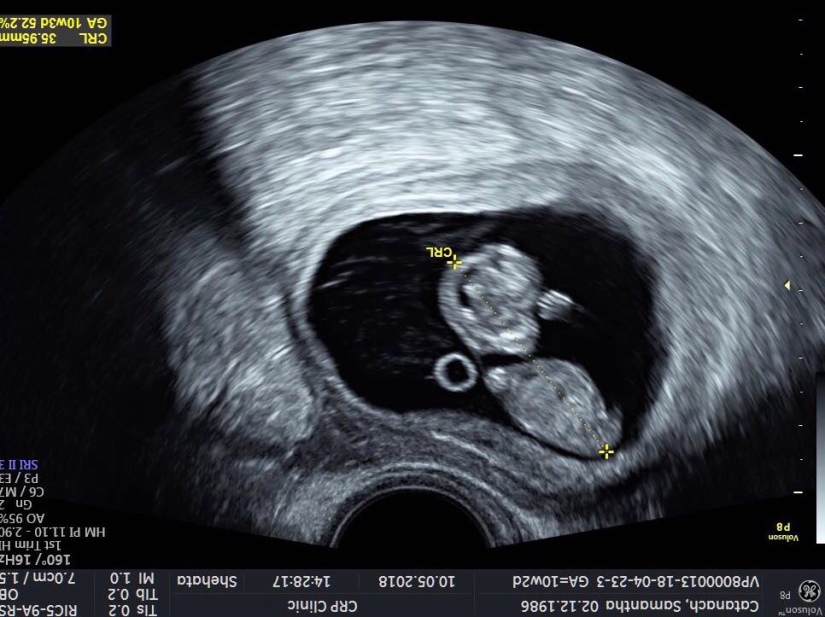 View all posts by crazyfertilityqueen